He was ordained on 25 September 1901 and served from then until 1905 in the parish of Mariental. On 22 June 1905, he began service to the parish of Kandel (Odessa District). He served there for more than 30 years. He was arrested in 1934 and spent four months in pre-trial detention in Odessa. Following his release, he was permitted to return to Kandel but was not permitted to hold services. In the spring of 1935, he was again arrested and on 10 May 1935 was convicted and sentenced to 10 years. He was deported to northern Kazakhstan. 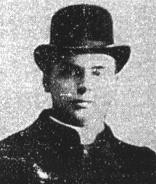