The Rev. Johann Wilhelm Michael Allendorf, son of Pastor Johann Michael Karl Allendorf & Wilhelmine Stoll, was born 4 January 1827 in the Volga German colony of Yagodnaya Polyana while his father was serving there. He studied theology at the University of Dorpat (Estonia) and was ordained on 27 December 1853 in the colony of Rosenheim.  He married Alexandrine Langhammer on 19 August 1854 in Dorpat. He died 23 November 1900 in the colony of Kukkus.

He served the Lutheran congregation in Kukkus from 1854 until his death in 1900. From 1883 to 1900 he also served as the Provost (Dean) of the pastors of the Wiesenseite Lutheran colonies. 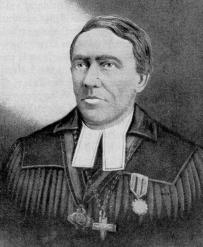