The Rev. Johannes Allendorf, son of Pastor Johannes Wilhelm Michael Allendorf & Alexandrine Langhammer, was born 20 August 1856 in the Volga German colony of Kukkus where his father was serving at the time. He died 1 March 1932 in the colony of Friedenfeld.

Pastor Allendorf studied theology at the University of Dorpat (Estonia) and was ordained on 12 June 1883. He served the Lutheran parish in Astrakhan from 1892-1894, and the parish in Eckheim from 1894-1931. When the parish in Eckheim was closed in 1931, he moved to the neighboring colony of Friedenfeld where he died the following year. 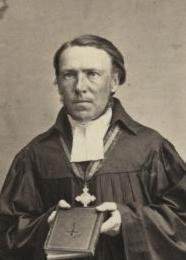