Romanus "Monty" Basgall, son of Jacob E. Basgall & Anna Margaret Roth, was born 8 February 1922 in Pfeifer, Kansas. He played major league baseball for the Pittsburgh Pirates (1948-49; 1951) and went on to coach with the Los Angeles Dodgers from 1973 to 1986. He was part of Tommy Lasorda's coaching team when the Dodgers won the World Championship in 1981. 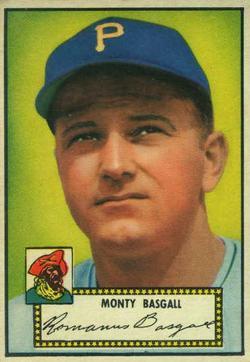 Monty Basgall during his time with the Pirates.
Source: Find A Grave Memorial.