Father Raphael Dietrich was born in 1894 in the colony of Speyer (Kherson Province).

He studied theology at the Catholic Seminary in Saratov and was ordained in 1918.

He was first assigned to the parish in Saratov and then to the congregation in Preuss where he served from 1922 until he was arrested in 1930 during the round-up of Catholic priests that took place then. It is also reported that he was active in the parish in Hölzel from 1929-1932.

His fate is unknown. 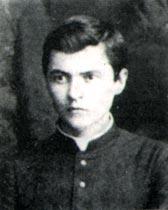