Pastor Erbes was married first to Rosalie Lohrer from the Crimea.

He married on 18 May 1918 to his second wife, Elisabeth Grasmück, from Lauwe.

He studied theology at the University of Dorpat (Estonia) and was ordained on 10 May 1901 in the Volga German colony of Krasnoyar. He served as vicar in Krasnoyar in 1901, and then served the congregation in Kukkus from 1902 to 1930.

Pastor Erbes was active in the publication of the Saratov newspaper called Deutsche Volkszeitung. He was also a participant in the First Volga German Congress held in Saratov 25-27 April 1917 where he was part of a working group to improve schools among the Volga German colonies.

In 1930 he was arrested along with many other Volga German clergy. In December 1931, he was exiled to Semipalatinsk where he died of typhus on 26 February 1932. 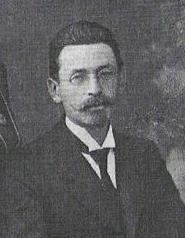