Father Michael Hatzenböller (some records spell the name Hatzenbühler) was born 26 September 1878 in Neu-Baden (today: Gudewitsch) in the Odessa District.

He studied theology at the Catholic Theological Seminary in Saratov and was ordained on 25 April 1904.

He served the parish in Ober-Monjou from 28 July 1905 to 1907. The remainder of his career was spent serving parishes in the Odessa District.

Father Hatzenböller was arrested in Mariupol in October 1937. On his way to an interrogation, he admitted to the accompanying NKVD soldier that he had indeed participated in the 1921 uprising among the German colonies along the Volga. The soldier immediately shot him in the street. 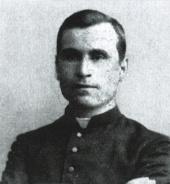