Edward Huber, son of the Rev. Johann Samuel Huber & Johanna Louisa Weigand, was born in 1814 in Katharinenstadt [some sources record his birth in Messer] where his father was serving as pastor of the northern parish. Huber was native language German. The family moved to the colony of Messer in 1820 where his father served as pastor.

At the age of four, under the guidance of his father, he learned to read, and soon began to study Latin and Greek. When he was six years old, he wrote in German and Latin.

In 1823, the family moved to Saratov and Edward was admitted to the school. In 1830, Huber graduated high-school course and at commencement read his Russian poem "Farewell to Friends."

From 1832 to 1834, he studied at the St. Petersburg Institute of the Corps of Transport. He graduated with the rank of lieutenant and joined a military engineering company.

However, his major interests were literary. Huber's poems were published in various magazines. In 1835, Huber was the first to translate the tragedy of Goethe's "Faust" into Russia, but the censors banned the printing. He became depressed, and destroyed the manuscript. Pushkin, learning about it, persuaded to take up return to the translation. Dedicated to Pushkin, it was published in 1838 although many pages of text were removed by the censors.

In 1839, Huber retired with the rank of captain and joined the civil service in the Office of the Chief Commander of Communication. He did not get along with the chief Earl Kleinmikhel, and finally left the service.

By order of the Russian Academy of Sciences, he translated from German into Russian the "Tibetan Grammar and Vocabulary." Subsequently, he wrote articles on the history of German literature for "Etsiklopedicheskogo dictionary" Plyushara. In 1840, Huber became the head of the criticism department and "Literary Chronicle" in the publication Library for Reading, but due to a massive heart attack in 1842, was forced to leave the magazine.

In 1845, Huber has authored one of his best works - the poem "Prometheus," and a year later he returned to the magazine where he lead the departments of satire and drama.

He suffered another severe heart attack and died 11 April 1847. 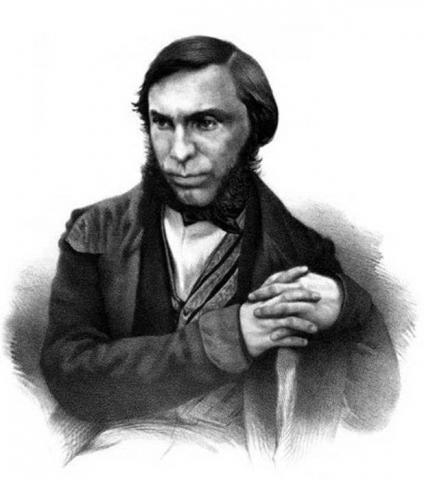