Gotthilf Heinrich Keller was born 27 May 1834 in Alexandersdorf, Tiflis District, the son of Melchior Keller and Johanna Margarethe Hübner. He died 30 June 1911 in Taganrog, a seaport city on the Sea of Azov. He is a brother of Pastor Isaak Theophil Keller.

He first married Hanni Lang on 21 August 1862 in Beggingen, Schaffhausen Kanton, in Switzerland. She was born 11 January 1841 in Beggingen, the daughter of Pastor Johann Jakob Lang and Margaret Galloway. She died 20 May 1892 in Katharinenstadt. His second wife was Emilie Wilhelmine Kelmser whom he married on 13 November 1903. She was born 19 November 1871 in Wesenberg (Estland), daughter of Kochs Hans Kelmser and Julie Biber. She died 8 October 1952 in Ingweiler near Zabern, Elsass-Lothringen (now in France). 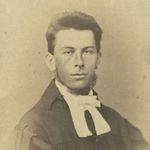