Father Nikolaus Kraft was born 6 December 1875 in the German colony of Kleinliebental in the Odessa District. He studied theology at the Catholic Seminary in Saratov and was ordained 2 May 1899.

He served his home parish of Kleinliebental and later in the colony of Christina in Ukraine. From 1907-1921 he served the Volga German parish of Mariental.

He was arrested in 1921 and charged with leading the anti-Bolshevik uprising in Mariental that year. He was quickly tried and convicted. Along with 270 colonists, he was sentenced to be executed. He was shot on 3 April 1921, the first member of the clergy to be executed among the Volga German colonies. 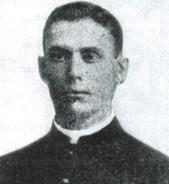