Father Joseph Kruschinsky was born in 1865 in Lewjanowo in the Mariupol district. He studied theology at the Catholic Seminary in Saratov and was ordained 5 February 1889.

On 1 May 1904, he became Vicar General of the Catholic Theological Seminary in Saratov, and in 1911 he became the Archdeacon there. From 1911 to 1918, he served as a professor in the Seminary.

After 1918, he left the Volga region, and from 1922-1932 served the parish in Karlsruhe in the Odessa District. He was arrested there in 1932 and sentenced to 3 years of exile in the Alma-Ata Region. He was again arrested there in May 1935, and his sentence extended another 3 years. In early 1937, he was transferred to the village of Talgar near Alma-Ata where he worked as a shepherd. According to reports from the Polish Embassy, he was arrested again later in 1937.

He died in exile on 31 July 1940 and was buried in the same grave with his friend, Father Raphael Loran, in Alma-Ata. 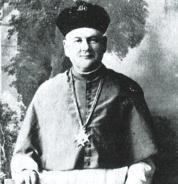