Father Sommereisen was the first resident priest among the newly-founded Volga German parishes in Ellis County, Kansas. He arrived in October 1876 and took up residence in Hays. He visited the colonies each month through May of 1878.

Father Sommereisen was born in Alsace in 1829, came to America in 1854 and was ordained on 8 March 1856. For a number of years, he served as a missionary among the Sioux Indians. He retired in 1878 to his vineyard northeast of Hays where he lived until his death in 1897. 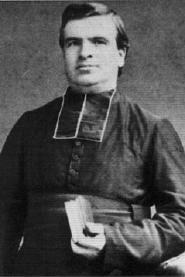