On 15 April 1928, Adán and Andrés (Adam & Andrew) Stoessel, sons of Andreas & Anna Maria (née Masson) Stoessel from the Volga German colony of Dehler, departed their hometown of Arroyo Corto in the Buenos Aires Province of Argentina in a Chevrolet Model 1928 with the intention of driving all the way to New York in an era when the Pan American Highway was still only a dream.

They arrived in New York City on 30 April 1930, two years and 15 days later. During their journey the brothers faced innumerable challenges and dangers: storms, illnesses, raging rivers, political upheavals, and attacks from bandits.

This legendary journey was recorded on film shot during the journey. The invaluable footage captured by the brothers includes the only images of Nicaragua that exist before the earthquake that almost completely destroyed Managua shortly after they drove through it, as well as the only images that exist of some Latin American capitals at the time, most of them which still preserved their colonial past. A documentary (in Spanish) based upon the Stoessel brothers' expedition was one of 23 films presented during the 2011 Latinbeat Film Festival of The Film Society of Lincoln Center.  Link to the documentary about the Expedition (in Spanish).

- The Film Society of Lincoln Center 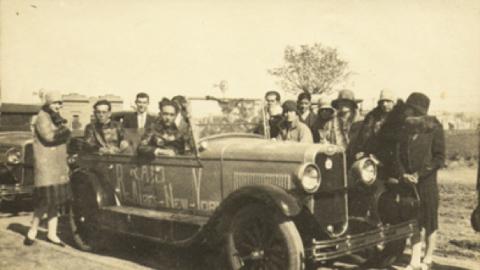 The Stoessel brothers prepare to begin the journey to New York.