Father Johannes Zimmerman, son of Andreas Zimmermann, was born in 1885 in the Volga German colony of Seelmann. After completing his studies at the seminary in Saratov to 1908 he was ordained a priest and began serving the parishes in Astrakhan and then Tsaritsyn (Volgograd).

When he was arrested the final time, he was serving as the Dean of the parish in Saratov.

On 6 June 1931, he was convicted by a secret court and sentenced to three years of concentration camp imprisonment. He was released in 1934 and returned to Brabander where he was arrested once again on 20 April 1935, convicted, and sentenced to another 3 years in a labor camp. In 1937, he was arrested there and put in prison. There he was convicted of anti-government activities by the NKVD on 13 August 1937 and received a sentence of capital punishment. He was executed by gun fire on 17 August 1937. 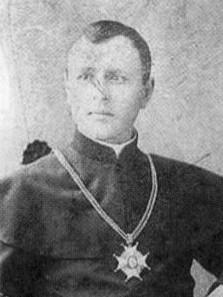