Ährenfeld was given the Russian name of Kratzke (one of its Mother Colonies) even though the name of Kratzke was the German surname of the original leader of the colonists on their journey from Germany.  This double use of the name Kratzke is easily confused in records found in both Russia and the Western Hemisphere.

In 1915, during the anti-German presures of the World War I era, Ährenfeld was given the Russian name of Gradsko.

Today, what remains of the former colony of Ährenfeld is known as Chkalovo.

Most of the colonists who founded Ährenfeld were Lutheran.

In the beginning, the Lutheran congregation in Ährenfeld was served by the pastor from the parish in Warenburg. In 1865, the parish in Eckheim became independent, and Ährenfeld's pastor began to come from there.

A Bethaus (combination school / church facility) was constructed of brick in 1899. The sanctuary was located on the top floor and was designed with seating for 450 parishners. This parish was closed following the decree from Moscow on 20 January 1934. When it was closed, there were still 649 people registered in the church community.

This building still stands. It's steeple was removed during the Soviet era, and today it serves as a community center and houses village administrative offices.

There was also a small Roman Catholic prayer house in Ährenfeld. 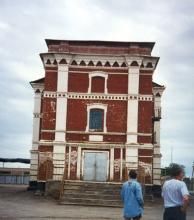 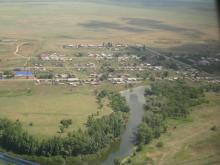