These last three were quite small and eventually merged into one colony called Krasnovka.

During the early years, the congregation worshiped in a private house in Mariental. A church was built in Alexandertal in 1866 that also served the surrounding Mennonite communities. 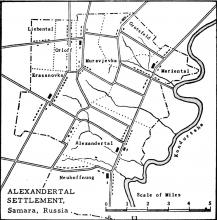