Dönhof was founded on 21 July 1766 by colonists from Württemberg and Schleswig-Holstein (Denmark) who had been recruited directly by the tsarist government (thus the term Crown Colony).

The colony was named after the leader of that original group of settlers, Christian Dönhof.

By the decree of 26 February 1768, Dönhof received its official Russian name of Golobovka.

The colony was attacked and plundered by Pugachev and his rebels on 11 August 1774.

In the 1850s, many Dönhof families resettled to the daughter colonies of Rosenberg and Unterdorf.

From 1889-1891, a number of Dönhof families resettled to the colony of Podsosnovo in Siberia.

There was a school located in Dönhof since the founding of the colony. A college was also built there.

As of 1894, there were over 700 people engaged in the manufacture of gingham fabric. Each Monday there was a bazzar and during the summer (June 2-24) and the first Sunday in October (for 3 days), the colony held a regional trading fair.

Today, the former colony of Dönhof is known as Vysokoye.

The original colonists of Dönhof were of the Reformed faith. The congregation was originally part of the Grimm parish.

In 1914, with the arrival of The Rev. Adalberg Hugo Willigrode, it became an independent parish, and he served Dönhof and surrounding communities.

A wooden church with an iron roof was built there in 1834. Nothing remains of the church today.

The congregation in Dönhof was served by the following pastors: 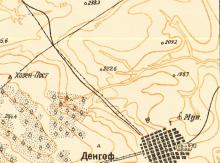 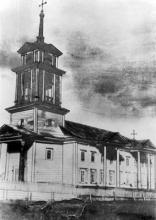 My great grandfather was from doenhof and immegrated to wauseon ohio in 1913 with wilhelm lind. his name was Karl Jacobi was married to Katrina Eichhorn feb 14 my grandfather was also born there carl jacobi on 6/07/1908  his mother and him arrived ellis island sept 1, 1913 abored the GEORGE washington and were to meet my grgrandfather at pobox 16 wauseon ohio . they had two more children born there ans moved to sandusky ohio in 1921 and had a daughter. they spent the rest of there lives in sandusky are buried at oakland cemetry. i feel they should be added to the list. in researching i feel the ones that didnt go out west get left behind , nothing or very little is told on areas where they came to before going or staying. wauseon seems to be forgotten if the people hadnt left doenhof they would have probably died from the famine that followed.

I am descended from Eichhorn from Doenhof here in Argentina, if you want you can contact me at eichhorn.hv@outlook.com, or find me in Facebook, Hugo Vazquez Eichhorn

I am happy to add additional locations where descendants from Dönhof settled.  Wauseon is already included.  Can you tell me more about the Volga German families who moved to Sandusky so that I can add them?!  Thanks!  Brent Mai (bmai@fairfield.edu)

In the list of surnames are missing Eichhorn, who arrived from The German colony of Neuborm in Denmark to Doenhof, the Eichhorn originated from Stockbronner Hof in Neckarzimmern in Baden-Wurttenberg, they emigrated to Colonia Gral Alvear in Entre Rios in Argentina, And some also to the United States, for more information about the Eichhorn you can contact me at eichhorn.hv@outlook.com

Hugo - I have added an entry for the Eichhorn family from Dönhof (http://vgi.fairfield.edu/surnames/eichhorn-d%C3%B6nhof).  Please help me to add details like other surnames. Thank you for sharing your research!!  Brent Mai (bmai@fairfield.edu)