Erlenbach was founded in 1847 as a Lutheran colony by resettlers from Grimm, Franzosen, Dönhof, Stephan, Shcherbakovka, Galka, Holstein, Schwab, and Dobrinka.

Since 1852, there had been a parochial school in Erlenbach and in 1891, a government school was also constructed there.  A new elementary school was built in 1926.

During the Soviet period, the area around Erlenbach was part of the collective farm called "Rother Stern."

Following the deportation of the Volga Germans in 1941, the settlement was renamed Remennikovo, after the merchant Remennikov who founded a farm on this location in 1828.

In 1968, the settlement was abandoned, and today, nothing remains of the former Volga German daughter colony of Erlenbach.

Erlenbach was a Lutheran daughter colony that belonged to the parish headquartered in Rosenberg.  There was a wooden church in the colony, built in 1872. 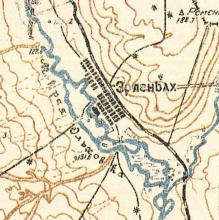