The Volga German colony of Frank was founded on 16 May 1767 by 117 families from the Mecklenburg, Pfalz, Saxony, and Darmstadt-Isenburg regions of present-day Germany. It was located along the left bank of the Medvyeditsa River from which its Russian name of Medvyeditskii Krestovyi Buyerak was developed. Medvyeditsa means "she bear" in Russian.

By 1859, there were in Frank a Lutheran church, a parochial school, a market, 3 seed-oil producing factories, and one mill.

In the 1850s, colonists from Frank moved to the Wiesenseite to found the daughter colonies of Brunnental and Langenfeld.

A Regional government school was built in Frank in 1871.

Today, what remains of the colony of Frank is known as Medvyeditza and is relatively prosperous for the area. It has survived in part because of its proximity to the Russian oil town of Zhirnovsk to the south.

Following the release of the Volga Germans from the "Special Settlements" of Siberia and Kazakhstan in 1956, a number of Volga German families moved back to the Volga region and settled in Frank. A particularly large group of these families had previously lived in the colonies of Sewald and Rothammel.  Today, in the post-1946 cemetery of Frank one finds the graves of many of these families.

The Lutheran parish of Frank was established in 1768, and there was a resident pastor in Frank.  A new church building was constructed in 1842.

During the Soviet era, this building was torn down, and today a park is located where the church formerly stood.

Following the collapse of the Soviet Union in 1990-1991, the local residents of Frank were given the former parsonage to use for worship services. The two large rooms on the enast end of the bilding were used by the Lutherans and the large room on the west end was used by the Catholics (formerly from Sewald & Rothammel).

Today, most of the ethnic Germans who had resettled to Frank after 1956 have gone back to Germany, and all religious services for them have been discontinued.

A small Russian Orthodox Church is located elsewhere in the village today.

The parish headquartered in Frank was served by the following pastors: 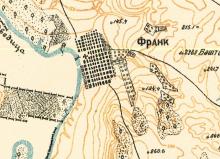 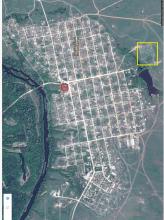 Satellite view of Frank. The red box marks the spot where the church used to be.  The yellow box marks the current cemetery (constructed after the 1941 deportation of the Volga Germans).
Source: Maggie Hein 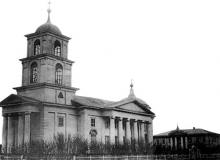 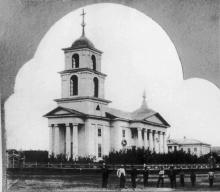 Lutheran Church in Frank. School is visible in the background. 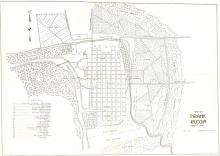