Frankreich was founded in 1861 by Lutheran colonists resettling from Galka, Shcherbakovka, and Schwab, but there were already German colonists living there before that time. It is 6 miles northwest of the Russian town of Pallasovka on the left bank of the Solyanka River.

Following the 1941 deportation of the Volga Germans, Frankreich was given the name of Solyanka after the river nearby.

The congregation in Frankreich belonged to the parish headquartered in nearby Alt-Weimar. 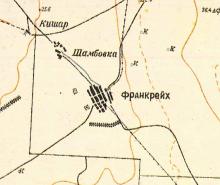