Fritzendorf was a khutor (farmstead) that was founded in 1832.  It was originally called Fyedorovka after Fyedor Nazarov who had acquired the land in 1798. It was then sold to a man named Kanishchev who built a mill on the river.  In 1832, Kanishchev sold some of the land to to Friedrich ("Fritz") & Peter Ehrlich from Shcherbakovka who also built a mill along the river, north of the Kanishchev Mill. It is after Friedrich that the khutor took its German name of Fritzendorf.

Nothing remains of Fritzendorf. The geographic coordinates are approximate, based upon maps from the 1930s.

There was no church building in Fritzendorf.  The families living there belonged to the Lutheran parish in Rosenberg. 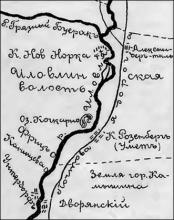