Gnadendorf was founded in 1859 [according to Klaus] on the right bank of the Nakhoi River. There appear to have been settlers there as early as 1850, however, because land distributions were made at that time.

As of 1910, Gnadendorf had a Lutheran church, a school, a brick plant, and three wind mills.

During the Soviet era, Gnadendorf and neighboring Rosenfeld were merged into one administrative village. It's name today is Rozovoye.

The congregation in Gnadendorf was part of the Lutheran parish of Weizenfeld where the pastor also lived. 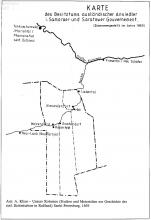