Gnadenfeld was founded in 1855 by colonists from the Bergseite colonies of Schilling, Balzer, Dönhof, Grimm, Norka, Schwab, and Moor.

By 1910, there were in the colony a prayer house, a parish school, and two windmills.

Today, what remains of the former Volga German settlement of Gnadenfeld is known as Kirovo.

In the beginning, the colonists worshiped in private homes. A large prayer house (Bethaus) was built in 1871. It served as a school during the week, but was used for worship services as well. The locals often called it the church. Eventually a small prayer house was also constructed by the Baptists who lived in Gnadenfeld. On 13 May 1933, the prayer house was officially closed by the Soviet authorities and all religious functions in the former colony ended. 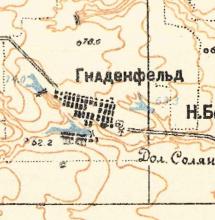