Hoffental was officially founded on the left bank of the Yeruslan River in 1859 by colonists resettling from Beideck, Frank, Grimm, Hussenbach, Kolb, Norka, Schilling, and Walter. These colonists had been living there as early as 1857 and appear on an 1857 census there.

The following families settled in Hoffental:

As part of the Russification efforts in the region, Hoffental was renamed Zhdanovka in 1915, but was again called Hoffental during the period in which the Autonomous Soviet Socialist Republic of the Volga Germans existed (1924-1941).

On 2 July 1942, the former daughter colony of Hoffental was officially renamed back to Zhdanovka.

In the first decades after the founding of the colony, worship services were performed in the Bethaus (a combined school/church building). In 1889, the colonists of Hoffental acquired the old wooden Catholic church in the colony of Louis and used the lumber to construct a new Lutheran Church on a stone foundation in Hoffental. The reconstruction of the church was overseen by V.S. Andreev who lived in Katharinenstadt. The exact date of the completion of the construction of the new church in Hoffental is unknown, but presumed to be 1890.

As of 1908, the congregation in Hoffental numbered 1,411 parishioners.

During the 1930s, the Hoffental Lutheran Church was closed by the Soviet authorities.

Hoffental (Wolgadeutsche.net) - in Russian
How Many Schillings Are There? (Gary Martens)

The following resources are available for those researching the families of Hoffental: 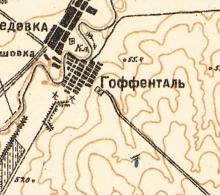