Josefstal was founded in 1852 as a Roman Catholic colony on the left bank of the Sukhaya Olkhovka (Dry Olkhovka) River. It was given this name in honor of St. Joseph.  The colony was intended to accommodate 56 families or 336 people. On 17 October 1852 in Josefstal there were already 34 families (206 people) living there.  One of the first colonists to settle there was named Schwab, and the colony was often referred to as Schwab's Khutor.

Emigration to American began in 1877 when 6 families left. In 1886 another 4 young men of military age left for America.

Since the founding of the colony, there had been a parish school in the colony, which by law should have taught all the children from 7 to 14 years. The school year started August 20 and ended June 20. The training took place each school day from 8 to 11 a.m. and from 2 to 4 p.m. In 1886, there were 87 boys and 55 girls enrolled in the school. In 1890, there were 103 boys and 87 girls. Despite the threat of a fine of 3 copeks for the missed days, many children, especially boys, did not attend school.

The parish education, however, was weak. Of the 887 residents of the colony in 1886, only 311 could hardly read printed letters, but truly literate people were very few. Dissatisfaction of the educational system in the church school, led in 1885 to the creation of a private school by several wealthy Josefstal families. There students were taught to read and write in both the Russian and German languages, the laws of God, a little geography, and 4 of the rules of arithmetic. Interest in this new school resulted in its rapid growth. There were 9 boys when the school was founded in 1886, 12 the following year, and by 1890 there were 20 pupils.

Today, nothing remains of the former colony of Josefstal.

The congregation in Josefstal was part of the Marienfeld parish.  Its first church was built in 1870 out of wood with a iron-clad roof.  A new church building was constructed in Josefstal in 1904. It served the congregation there until about 1937 when it was disbanded by the government.

The congregation in Josefstal was served by the following priests: 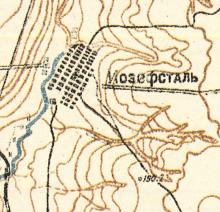 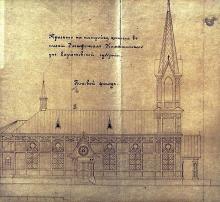 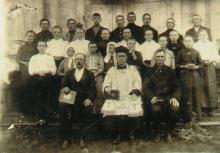