Jost was founded on 5 July 1767 by 73 colonists families recruited by LeRoi & Pictet from Saxony, Prussia, Hesse-Darmstadt, and Brandenburg.

The colony was named after Johann Gottfried Jost, its first leader.

The colony was plundered during the raids of Pugachev in 1774.

A new school was construted in Jost in 1926.

All of the Volga German inhabitants of Jost were deported to Siberia and Kazakhstan in 1941.

The former Volga German colony of Jost no longer exists, but its streets are still visible from satellite images.

The congregation in Jost was part of the Warenburg Lutheran Parish which had been established in 1770.

A new church building was constructed in Jost in 1859.

The congregation in Jost was served by the following pastors: 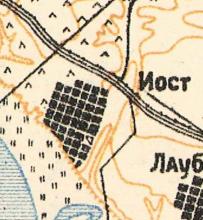 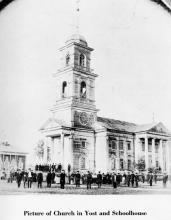 The Lutheran Church in Jost. The school is visible in the background, to the left. 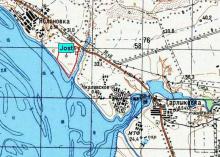 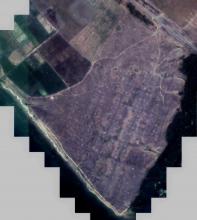 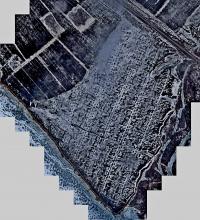 Satellite image showing the location of the former colony of Jost during the winter.
Source: Vladimir Kakorin.