Köhler was founded on 10 August 1767 by colonists who had been recruited by officials of the Tsarist Government from the German regions of Fulda, Würzburg, and Mainz. Minkh, however, reports that they came from Bavaria, the Rhein provinces of Alsace, and Lothringen.  The colony was named after Gottfried Köhler, its first mayor (Vorsteher).

It was located on the left bank of the Ilovlya River below the confluence of the Karaulny Buyerak.

The colony's Russian name (Karaulny Buyerak) was taken from this nearby river.

There was a parochial school in Köhler, founded at the same time as the colony. In 1884, a governmental district school was constructed in the colony.

According to Minkh, in 1887 the colony had 1 cooper, 5 blacksmiths, 13 wheelwrights, 2 stove-setters, 4 carpenters, 1 chenille maker, 6 cloth weavers, 4 woodworkers, and 17 shoemakers.

Today, nothing remains of the former colony of Köhler, although it still shows up on some maps under the name of Karaulno-Buyerachnoye.

The Roman Catholic congregation in Köhler was originally part of the Semenovka Parish, later becoming independent.

The original church structure was replaced in 1864 by a wooden church with a metal roof, built in the neo-classical "Kontor" style and dedicated to St. Michael Archangel. Pilgrims would visit the chapel in Köhler in honor of "Discovery of the Cross." Three priests were buried in the parish cemetery.

The parish in Köhler was served by the following priests:

The following also served as vicar in Köhler: 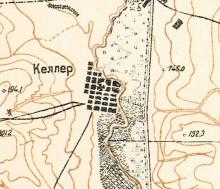 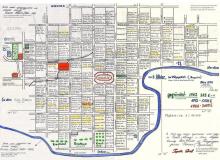 Map of Köhler (as of about 1926) compiled by Sabine Gareis.
Source: Regina Remisch. 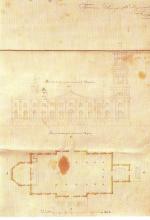 Architectural plans for the Catholic Church in Köhler (abt. 1863). Source: Saratov Archives via Köhler FB group.