The daughter colony of Kana was founded in 1860 by colonists resettling from the Bergseite colonies of Shcherbakovka, Schwab, Dreispitz, Holstein, Dobrinka, and Moor. Its name comes from the title of one of the original colonist recruiters: Baron de Caneau de Beauregard.

In March 1930, there was a mass action against those identified as kulaks (wealthy) in Kana. Following the 1941 deportation of the Volga Germans, Kana kept its name.

The Lutheran congregation in Kana belonged to the parish headquartered in Gnadentau. 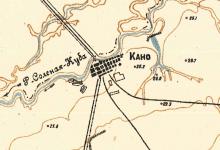