According to Klaus, the daughter colony of Liebental was founded on the Wiesenseite in 1859 on the right bank of the Malankaya Vetelka River where it joins with the Nakhoi River.

In the 1860s, inhabitants from the abolished colony of Friedental were resettled to Liebental.

A group of immigrants headed from Liebental to North America departed in the fall of 1875, sailing aboard the SS Ohio and settling in Kansas. This group is reported to include the following:

Today, what remains of the former Volga German settlement of Liebental is known by the name Pionerskoye.

The original settlers of Liebental were Roman Catholic. The parish was first connected with Louis, then Mariental. It became an independent parish in 1861.

The first church building was constructed in Liebental in 1872 in the Kontor Style. It was replaced by a new building in 1899 which was consecrated in honor of John the Baptist. The parish was officially closed on 21 October 1934. Today, nothing remains of this structure. 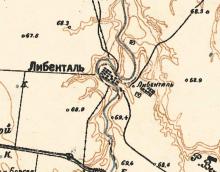