Mannheim was founded in 1860 by colonists from the neighboring Paninskaya District.

In 1915, the village was officially renamed Manovka.

What remains today of the former colony of Mannheim is known as Marinovka. There is a good sized dam on the Bolshoi Karaman River at Marinovka.

The founding Volga German colonists who settled in Mannheim were Lutheran. The local congregation was part of the parish headquartered in Gnadenflur.

Originally, parishners worshiped in the school building. A new structure was built in 1889-1891, and consecrated on 15 December 1891. It also served a dual function as school and church. In that same year, the pastor also relocated from Gnadenflur to Mannheim, but the name of the parish was retained as Gnadenflur. The church building was officially closed on 20 August 1934. 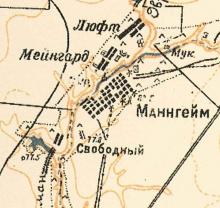