Mariental was founded on 16 June 1766 by colonists who had been recruited by LeRoy & Pictet. By edict dated 26 February 1768, the colony received its official Russian name of Tonkoshurovka. Christian August Toronow records that Mariental was called Weiler during the first couple of years after it was founded.

In 1773, Mariental was visited by Russian scientist and explorer Pallas. He reported that there was significant production of Swiss cheese in the colony, but that it was all produced for local consumption.

In 1774, the colony was attacked by local nomadic tribes and many of the colonists were killed and taken hostage during these raids.

In 1837, the future emperor Alexander II visited the village.

In March-April 1921, an anti-Bolshevik uprising took place in Mariental. When the rebellion was quelled, those believed responsible were executed by the Bolsheviks.

Today, the former colony of Mariental is known as Sovetskoye.

Mariental was a Roman Catholic colony. There were four different churches built in Mariental, each one larger than the last because of the increasing number of colonists living there.

Early settlers worshiped in their homes. The first church building was constructed of oak and fir timbers and was consecrated "Maria Himmelfahrt" in honor of the Assumption of the Virgin Mary.

Construction of a brick church began in 1830 under the direction of master-builder Ivan Minevich from Saratov. It was 51 meters long, 20 meters wide, with eaves 15 meters high and designed in the Kontor style. It was consecrated in November 1834, however it was not until 1842 that all the interior and exterior details were completed. The bell tower was 32 meters tall.

In 1860, a vestry structure was added to the church which made it possible to move the altar back into the apse.

During the Soviet era, the steeple was removed and the structure was used as a community center. It burned in 2000.

The parish of Mariental was served by the following priests:

The Mariental parish was also served by the following vicars: 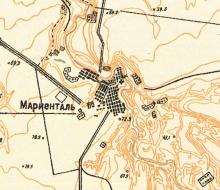 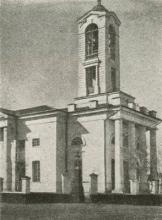 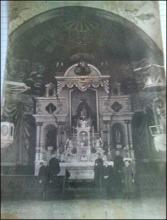 Interior of the church in Mariental. 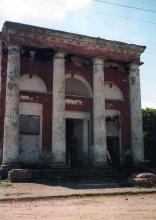 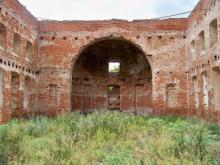 Interior of the ruins of the Mariental church.

Mariental showing the ruins of the church.
Source: Jorge Bohn.