Neu-Ober-Monjou was officially founded in 1859 in by colonists resettling from Ober-Monjou, Katharinenstadt, and Beauregard. There were, however, Volga German families living there before the official founding in 1859.

The colony's name was taken from Ober-Monjou, the original colony from which came the largest number of resettlers.

By 1910, there were in the colony a Roman Catholic Church, a school, and six windmills.

Today, what remains of the former colony of Neu-Ober-Monjou is included in the administrative area of Novokrivovka.

About 1864, a wooden church was built in Neu-Ober-Monjou and dedicated to St. Anthony of Padua. It was built in the "Kontor Style" with a tall tower, pillars on the front, and a interior balcony on three sides. In 1912, a new alter and side altars were added which had been carved of Tirolean wood by the world-famous Ferdinand Stuffleser.

The congregation in Neu-Ober-Monjou belonged to the headquarters parish of Liebental where there was a resident priest. Beginning in 1915, the congregation was served by priests from the parish in Louis.

On 10 July 1936, the Presidium of the Central Executive Committee of the ASSR of Volga Germans passed a resolution to officially close the parish in Neu-Ober-Monjou.

The church structure was dismantled at some point following the parish's closure. 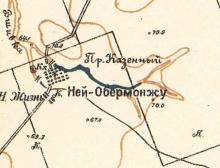