Pfeifer was founded on the right bank of the Ilava River on 15 June 1767 by colonists who had been recruited by the Government. Pfeifer was named after one of its first settlers, Johannes Pfeifer.  Pfeifer is located 117 versts from the provincial capital of Saratov, 65 versts from the district capital of Kamyshin, and 6 versts from the local administrative center of Kamenka.

From the beginning of the colony, there was parochial education available in Pfeifer. The students were taught reading, writing, and religion by a local schoolmaster under the supervision of the parish priest. In 1888, a government school was constructed in the colony.

Today, what remains of the former colony of Pfeifer is known as Gvardeyskoye.

The original colonists of Pfeifer were of the Roman Catholic faith practice.

In 1846, St. Francis of Assisi Catholic Church in Pfeifer was built of wood in a Kontor style. The building contained a high altar, side altars, and an organ that came from the South Tyrol. The upper half of the interior walls was whitewashed whereas the lower half was finished in light blue.

Pfeifer became an independent Catholic parish in 1871 with a resident priest.

The Church of St. Francis of Assisi is no longer standing.

The parish of Pfeifer was served by the following priests: 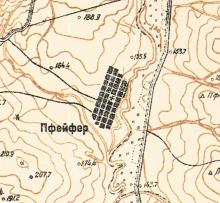 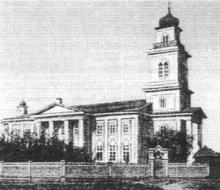 Church of St. Francis of Assisi in Pfeifer, Russia. 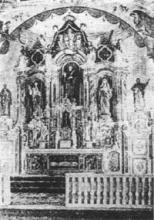 High Altar of the Church of St. Francis of Assisi in Pfeifer, Russia.
Source: Rosemary Larson