The colony was alloted 4,470 desyatina of land.

In 1915, as part of a regional Russification effort, the colony was renamed to Rozovka. During the period of the ASSR-VG, it was again called Rosental. Following the deportation of the Volga Germans in 1941, the name retuned to Rozovka on 2 July 1942.

Today, what remains of the former colony of Rosental is still called Rozovka.

The colonists in Rosental were Lutheran. The parish in Rosental shared a pastor with the congregations in nearby Schöndorf and Hoffental. 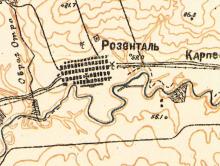