Schöndorf was founded in 1855 35 kilometers northeast of Krasny-Kut.  The founding colonists came from Pobochnaya. It was located on the left back of the Yeruslan River.

Since the founding of the colony, there was a parochial school in the colony. A government "Central School" was built in Schöndorf in 1871. A mill was completed in 1919.

Today, what remains of the former Volga German settlement of Schöndorf is now part of Repnoye.

The colonists living in Schöndorf were Lutheran. Some who lived there were also of the Reformed faith. There was a Lutheran parish there since 1864.

There was a Lutheran church in the colony and a prayer house (Bethaus) for those of the Reformed faith. 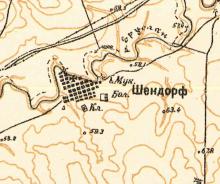