Schönfeld was founded on the left bank of the Yeruslan River in 1858 by 521 colonists resettling from the colony of Pobochnaya.

Following the deportation of the Volga Germans in 1941, the settlement became known as Polyanka.

Today, nothing remains of the former Volga German settlement of Schönfeld.

Schönfeld was a Lutheran and Reformed colony, but most of the colonists were of the Reformed faith. It was part of a parish that also included the neighboring colonies of Schöndorf and Schöntal.

During the first 40 years after the colony was founded, the colonists held worship services in a prayer house. The first wooden church structure was built in 1901. A large wooden belfry was constructed near the church. 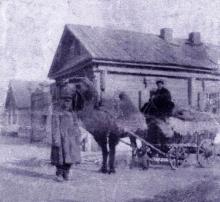 Herdt family in Schönfeld bringing goods to their butcher’s shop (in the background) by camel-drawn wagon (1908).
Source: Laurin Wilhelm.