The Lutheran colony of Schilling was founded by 96 families from the Pfalz and Alsace on 14 August 1764. They had been recruited by agents of the Tsarist Government. The colony was named after Johannes Schilling, an early leader of the colony. By decree on 26 February 1768, the colony received the Russian name of Sosnovka.

Notes accompanying the 1775 census of Schilling record that the colonists were dissatisfied with the quality of the land that had been allocated to them. The colonists are also identified as being diligent workers, both in the fields and in the vegetable gardens. They also cultivate fruitful orchards.

In 1859, 128 colonists moved to the daughter colony of Neu-Schilling along the banks of the Yeruslan River. They were joined in 1881 by another 48 colonists.

Schilling was a port colony, with large commercial cargo and passenger docks capable of handling 700 thousand tons of cargo per year. The port in Schilling received shipment of relief supplies during the 1921 Famine to the colonies on the Bergseite.

Immigration from Schilling to American began in 1874 and continued through 1878. Immigration resumed from 1881 to 1886.

Notes accompanying the 1775 census of Schilling record that materials from a dilapidated empty house were used in the construction of a prayer house.

Schilling was part of the Beideck parish during the early years. A wooden church was constructed in 1883. In approximately 1999, the remains of this structure were dismantled and the wood used for other buildings in the village.

The congregation in Schilling was served by the following pastors: 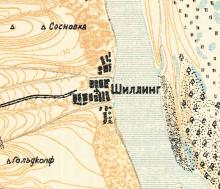 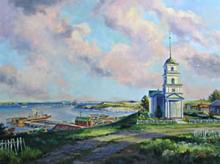 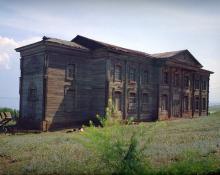 Ruins of the Schilling Lutheran Church.
The building has been subsequently torn down. 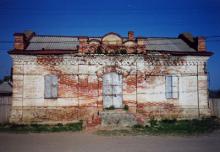