Straub was founded on 12 May 1767 by 59 colonist families recruited by LeRoy & Pictet from Weilburg, Braunfels, Isenburg, and Hanau. It was located on the left bank of the Volga River about 55 kilometers south of Pokrovsk (Engels). It was named in honor of its first leader, Johann Heinrich Straub.

Straub was plundered in 1774 by Pugachev and his followers.

The Volga German colonists were deported from Straub in 1941.  The colony was relocated to higher ground in on the bluff above the Volga River in anticipation of the inundation of the Volga Reservoir that was created by the construction of the Volgograd Hydroelectric Power Station which was completed in 1961. The former location is now mostly on an island in the Volga River.

Many of the buildings constructed by the Volga Germans were moved to the village's new location.

What remains of the former Volga German colony of Straub, now in its new location, is known as Skatovka.

The congregation in Straub was part of the Warenburg Lutheran Parish which had been established in 1770.

A new church was constructed in Straub in 1875 in the Kontor style.

The congregation in Straub was served by the following pastors: 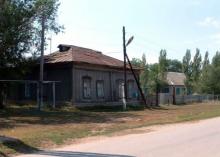 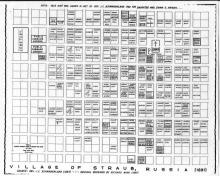 This map overlays several maps that show the location of Straub (top) before and after the inundation of the Volga Reservoir in 1961.
Source: Vladimir Kakorin.