Wittmann was founded on 3 August 1767 by colonists who had been recruited by Baron Caneau de Beauregard. However, the first colonists wintered in existing colonies, and relocated to Wittmann in 1768 according to historian Jakob Dietz.

By decree on 26 February 1768, the colony was given the official Russian name of Solothurn. It was named after one of the Swiss Kantons in an attempt to create a marketing image that would attract more colonists.

The colony was originally located on the Malinky Karaman River, but the land there was not good, and it was relocated to a more suitable location for farming in 1770 along the banks of the Volga River.

In 1915, the Russian name of the colony was changed from Solothurn to Zolotovka. Today, what remains of the former Volga German colony of Wittmann is known as Zolotovka.

The founding colonists of Wittmann were Roman Catholic.

The congregation in Wittmann belonged to the parish headquartered in Schönchen until 1901 when Wittmann became an independent parish with a resident priest of its own.

In the earliest years, worship services were held in the prayer house which doubled as the school and church for the colony. In 1800, a wooden chapel was constructed and consecrated in the name of St. Francis of Assisi. In 1840, a new larger building was constructed. A new church was constructed in the Kontor Style toward the end of the 19th Century. This building functioned as a church until 1931 when it was closed by Soviet officials. The structure burned down in 1933.

The parish in Wittmann was served by the following priests: 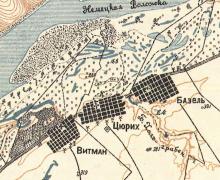 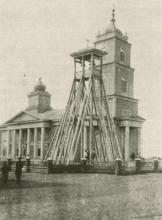