Emmaus Lutheran Church's history is traced back to 1899 when services were held near Ottokee, north of Wauseon. In 1911, the mission congregation began holding services in Wauseon, meeting in members homes, City Hall, and other church buildings. The congregation of Emmaus German Evangelical Lutheran Church was official organized on 16 November 1913.

The members of Emmaus Lutheran Church have been served by the following pastors:

Parish records, beginning in 1914, have been microfilmed and are available at the Center for Archival Collections, Bowling Green State University (MS 1101). 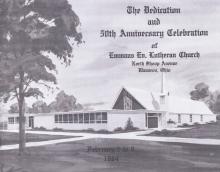