In 1913, an extant church building was purchased in downtown Fort Collins on the corner of Remington and Olive Streets which served the parish for 60 years. In 1972, the old facility was sold and demolished to make room for a convention center that was never built. The new building, completed in 1974, was constructed at 1900 S. Taft Hill Road. The stained glass windows, the cross in front of the church, and the bell from the old church building were used in the new facility.

Immanuel Christian Reformed Church has been served by the following pastors: 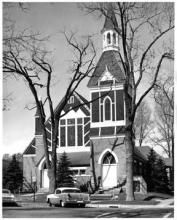