The first wooden church building in San José was constructed in 1888.

The current parish church in San José is called Iglesia San José Obrero (Saint Joseph the Worker Catholic Church). It was the brainchild of Father John Beckert. It was built under the direction of Father Juan Scharle. The cornerstone was laid on 18 September 1927 and dedication held on 7 May 1930. All construction was funded by the settlers themselves. Its twin towers are 50 meters tall with a 5-meter tall cross atop each one.

The parish of San José Obrero has been served by the following priests:

- A complete index of the 2,350 burials in San José (Excel format) - prepared by Horacio Agustín Walter.

The first church in San José can be seen on the right side of this photo (1914).
Source: Jose Bohn. 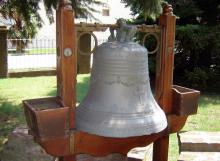 First bell of San José which was purchased in Europe.
Source: Gerardo Waimann (2008).