The parish in Schoenchen was named St. Anthony's after patron saint of the church in Neu-Ober-Monjou, the colony in Russia from which a number of members of the new town had immigrated.
The settlers built their first small stone church in 1880, but it was abandonded when the foundation settled badly after a heavy rain. A new frame structure was built in 1881. In order to serve the growing congregation, a new stone structure was begun on 18 April 1900 that stands today. It was dedicated 13 June 1901. Pastor Emmeram Kausler, who had been a stonemason in his youth, was the designer and builder of this facilty.

The following priests have served the parish of St. Anthony's: 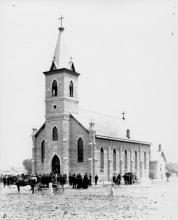 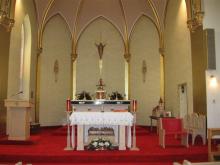