The earliest known date that Mass was said in Ellis was in 1872 by Fr. John Fogarty, a diocesan priest from Solomon City. This Mass was said for men working on the railroad. Between 1876 and 1878, a large number of Volga Germans settled in Ellis and Rush Counties. Fr. Adolph Wibbert from Salina, Kansas, was sent to visit the Catholic settlers of Ellis County in May 1876. Fr. Wibbert came once a month. He was accompanied in October 1876 by Fr. Valentine Sommereisen who became the first resident priest in Ellis County, living in Hays. He moved to Victoria in 1877. Since the arrival of Fr. Mueller in 1878, the parish has been served by members of the O.F.M. Cap. (Capuchin Fathers).

The first Catholic congregation was organized in Ellis in 1886 and the first church building constructed in Ellis was dedicated on 26 May 1889. Already in 1890 it was enlarged. To accommodate the growing number of immigrants, a new church building was constructed. It was dedicated on 8 December 1900. It was a two story building with school rooms on the first floor and the sanctuary on the second floor. The continuing influx of new settlers to Ellis brought about the need for a third church building. The new corner stone was laid on 27 June 1909 on the lots adjacent to the old property. By August 1911 the main part of the building was ready for occupancy. It is a Romanesque style building constructed of native magnesia lime stone. The school expanded into the part of the former building that had been used as the sanctuary.

St. Mary's has operated a parochial school since the second church/school building was constructed. The first classes began 7 October 1901 with 58 pupils. Kate Basgall served as its first teacher. In 1905, the Sisters of St. Agnes, Fond du Lac, Wisconsin, took over operation of the school. A new building was dedicated on 17 October 1948.

The following priests have served the parish of St. Mary's in Ellis: 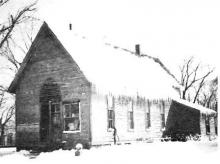 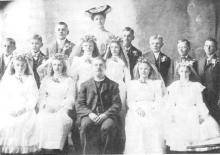