St. Michaels Parish was founded in 1911 and in 1922 became a mission of the Sacred Heart Parish in Cordia. By 1929, the Sacred Heart Parish was in dire financial circumstances, while the LaCrosse congregation was growing rapidly. This prompted the Rt. Rev. August J. Schwertner, Bishop of Wichita, to move Rev. Fr. Hard, resident Priest in Cordia, to LaCrosse. The residents of Cordia agreed to sell their rectory to LaCrosse and in spring of 1929, the house was moved to the corner of 9th & Lincoln Streets in LaCrosse where it stood until being dismantled in the mid-1960s.

Eventually, the Sacred Heart Parish disbanded and in 1943 the former church building in Cordia was moved to LaCrosse. There it served the congregation of St. Michaels Parish until a new brick church was completed in 1962. It then served as a Parish Hall and gymnasium for the adjacent school until being razed in the late 1970s.

The congregation of St. Michael's has been served by the following priests:

- Transcript of The Golden Jubilee of German-Russian Settlements of Ellis and Rush Counties, Kansas, 1926. 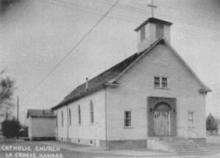 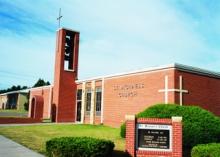