A group of 55 Volga German families from the colonies of Kamenka, Volmer, Schuck, and Hildmann arrived in the port of Buenos Aires on 24 September 1885. They went first to the colony of Hinojo where many of them had relatives.

After 18 months, the group realized that there was not enough land near Hinojo for them to farm, and Father Louis (Luis) Servet organized a group to begin negotiations with Eduardo Casey, an Englishman who in 1883 had acquired a plot of land along the Sauce Corto River which flows to the north out of the Curumalán Range. The Provincial Government did not want any more villages to be established, and after 45 days of negotiation, approved a plan whereby the families would live on individual farms. However, the plans for the establishment of a town were eventually approved, and on 3 October 1886, the colony of Primera was founded in the Coronel Suárez Partido (Department) of the Buenos Aires Province. In the early days, it was called Hildmann after the colony in Russia from which many of the founding families had immigrated. Today it is offically known as Pueblo Santa Trinidad.

The following men and their families are part of the founding group: 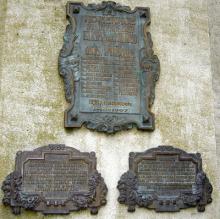 Plaques honoring the Parish Council, the builders of the church and the priest, Luis Servert, the guide of the original settlers.
Source: Gerardo Waimann (2008).