A group of German immigrants who had only a few years earlier settled in what is today Denmark answered the call of Catherine the Great's 1763 Manifesto. Most of these settlers ended up in the main group of Volga German colonies near Saratov. One group of 60 families, however, settled in an area considerably west of Saratov, arriving in February 1766 in Ostrogoshsk. Because of the familial and religious connections to those who settled along the Volga, those in this group are often included as Volga German settlers.

Later in 1766, the families relocated to land belonging to Prince Tevyaschev and set up their tents on the Sonsa River, and the town of Riebensdorf was founded. It was named Riebensdorf after the Russian word "rybnoye" which means fish, because there were abundant fish in the nearby rivers.

Today, what remains of the colony of Riebensdorf is called Rybnoye.

The Lutheran parish in Riebensdorf was served by the following pastors:

The church was disbanded by the Soviet government in the 1930s. 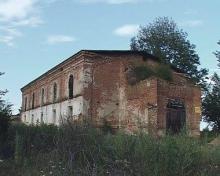 Ruins of the Lutheran Church in Riebensdorf.
Source: Jorge Bohn.