Sarepta was founded by the Herrnhutt Brethren (the Moravians) from Saxony in Germany. Dietz (pp. 407-414) outlines the special agreements that were negotiated with the Russian government to gain permission for the establishment of the colony. In August 1765, the first group of Moravian colonists arrived in Saratov. From there, they launched their search for an appropriate settlement location. They chose a location 28 versts south of Tsaritsyn where the Sarpa River flows into the Volga. On 23 August 1765, the Moravian brethren began laying out their new settlement. [Koch and Beratz report that Sarepta was founded on 3 September 1765, according to the Gregorian calendar.] In 1769 there were fewer than 60 colonists in Sarepta. An additional 30 colonists arrived that year, followed by another 30 colonists in 1771.

Having been warned by the commandant in Tsaritsyn to evacuate, the colonists in Sarepta escaped the Pugachev attacks in August 1774. Those fleeing the mauraders arrived by both boat and land in Astrakhan on 27 August 1774 where they stayed until the rebels had left Sarepta. The colony was virtually destroyed; the candle factory, hotel, and church had been plundered.

About a century after its founding, the established German Lutheran Church in Russia, with the support of the Russian government, began efforts to take Sarepta under its wing. Many of the Brethren objected to this and left the colony.

In both 1801 and 1803, there were fires that destroyed portions of the colony.

In 1812, the Russian Bible Society established a branch in Sarepta and in 1814 received permission to translate the Bible into the Kalmyk language.

The colonists in Sarepta were responsible for beginning the manufacture of a choice gingham material called sarpinka. Many other Volga German colonies took up the manufacture of sarpinka, and by the end of the nineteenth century, there were hundreds of small factory operations producing this cloth and employing thousands of colonists.

Sarepta was renamed in 1920 to Krasnoarmeisk, and in 1931 was incorporated into the city administration of Volgograd (then Stalingrad).  The area did not suffer much damage during the 1942-43 seige of Stalingrad by the Nazis because it was located away from the center of the city, and consequently many historical buildings remain. There has been an open-air museum in the neighborhood since 1990. It tells the history of Sarepta and the people who lived there.

The original church structure built in Sarepta was for the Moravian Brethren, and most of the early settlers living in Sarepta were part of this congregation.  After Sarepta lost its status as an official Moravian congregation, it became a Lutheran community.

The original church, built in 1780, has been restored and is in use today.

Karl Becker's research reveals that the following families went to Sarepta between 1785 and 1822:

The Lutheran parish established in 1894 in Sarepta was served by the following pastors:

During the 1793-1794 travels of Peter Simon Pallas through the Volga German region, this engraving was created. The Sarpa river is visible on the right and goes behind Sarepta (in the center) before it empties into the Volga in the distance (upper left). The little village in the left foreground is probably Schönbrunn, which was the water source for the colony of Sarepta.
Source: Karl Becker. 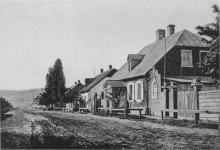