The fortress of Tsaritsyn was founded in 1589 at the confluence of the Tsaritsa and Volga Rivers.  Its purpose was to protect Russia's southern border. Over the next two centuries, Tsaritsyn became an important trading post.  During the Pugachev Rebellion, the city was captured by the rebels in 1774.

Many Volga German families relocated to Tsaritsyn to work.

The Tsaritsyn was the scene of heavy fighting during the Russian Civil War in 1917 and 1918. The Red Army, led by the Bolshevik commander Joseph Stalin, was able to defend the city against the White Army's forces who were first defending and subsequently trying to re-establish the monarchy. The city's name was renamed Stalingrad in 1925 following Stalin's ascent to the Chairmanship of the Bolshevik Party.

Germans living in Stalingrad were subject to the Deportation Decree of 28 August 1941, and were deported to Siberia and Asiatic Russia during the first weeks of September 1941.

The Battle of Stalingrad (from 21 August 1942 to 2 February 1943) was the pivotal battle of Russia's defense against the Germans during World War II. The city was reduced to rubble during the battle, but rebuilding began soon after the battle ended.

In 1961, the city's name was changed to Volgograd as part of Nikita Khrushchev's programme of de-Stalinization.

Tsaritsyn became an independent Lutheran parish with a resident pastor in 1867.

The Lutheran parish in Tsaritzn was served by the following pastors:

The Catholic parish in Tsaritsyn was served by the following priests: 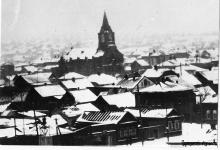 Panorama of Tsaritsyn showing the Catholic Church in the distance.
Source: Jorge Bohn.

Street scene in Tsaritsyn with the Lutheran Church in the distance on the left.
Source: Jorge Bohn.

Today, there is also a functioning Catholic parish in Volgograd.
Source: Jorge Bohn.