The first group of Volga Germans to immigrate to Fresno left the colonies of Straub and Stahl am Tarlyk on 8 May 1887. They arrived at the old Southern Pacific Depot in Fresno on 19 June 1887. This first group was comprised of 31 men, women, and children. It consisted of the following families: Andreas, Berg, Kerner, Karle, Metzler, Mehling, Nillmaier, and Steitz. The second and third waves of Volga German arrivals in Fresno brought the following families: Bopp, Bitter, Diel, Gleim, Hartwig, Heinze, Hubert, Lieder, Roth, Scheerer, and Schwabenland.

Over the years, immigrants also arrived from Anton, Bangert, Gnadendorf, Jost, Kautz, Kukkus, Laub, Lauwe, Neu-Schilling, Shcherbakovka, Stahl am Karaman, and Warenburg. By 1891, the number of Volga Germans living in Fresno reached 167; by 1899 it was 734; and by 1908, it had reached 3,000.  By 1920, the Volga German population in and around Fresno had grown to 8,000. The Volga German population by 1970 reached over 100,000, and it is estimated today that there are at least 250,000 Volga German descendants in the Fresno metropolitan area.

The original Volga German neighborhood in Fresno was bounded by Church, Mono, G, and Fruit Streets.

The following Volga German families settled in and around Fresno:

Area of Fresno where "Germantown" used to be.
Source: Architectural Resources Group. 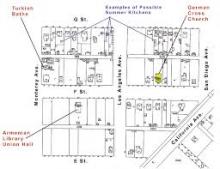 Area of Fresno where "Germantown" used to be.
Source: Architectural Resources Group.